A postmortem of Neato BI, a cloudless data analysis and visualization tool.

Neato was to be a data analysis and visualization (aka, business intelligence) tool. There were a few features that I had in mind that would (hopefully) make it a unique product offering: 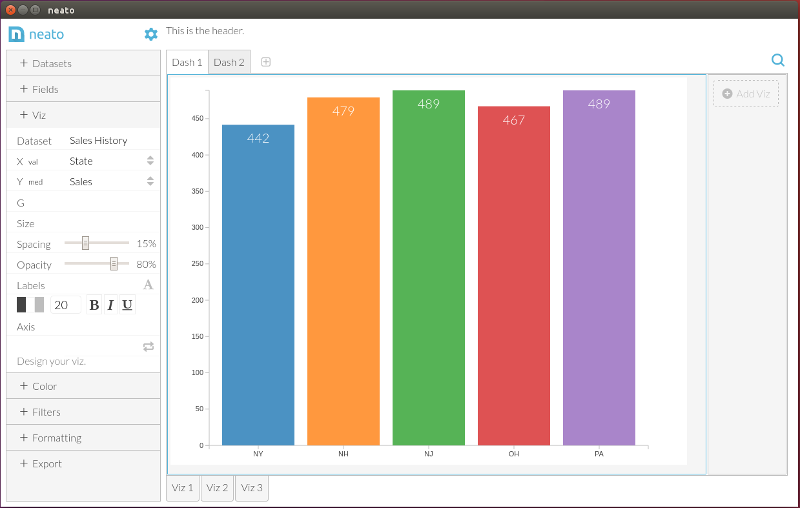 A very rough early version of Neato running in Electron on Linux.

Neato became my core project because data visualization is something I am very passionate about; it's in my wheelhouse. At my last job, I developed and led an initiative to vastly improve data-based decision making by creating a data warehouse and introducing business intelligence tools (we adopted Tableau back when it was fairly new; we were probably one of the first companies to deploy their server product.)

So like I said, Neato has been my core project, at least in theory. On the one hand, it's the project I keep coming back to. But on the other hand, I only keep "coming back" to it because I keep getting distracted with other ideas. That's a red flag.

There have been other issues as well. I've had a hard time finding a co-founder who shares my passion for data and data visualization. Working on my own, I soon realized that the task was simply too big for just me. I'm comfortable with the database side and getting better at UI design, but the JavaScript that drives the visualizations is complex. I would have been completely lost without D3.js, but I still struggled and never truly understood exactly how the pieces fit together.

The nail in the coffin has been a wave of competition in the space. Frankly, I'm extremely jealous. Many of these tools look awesome, and a few even have features that align with what I conceived. But make no mistake, there are a ton of these tools now. Here's a taste:

There are plenty more, and this doesn't even include JavaScript charting libraries or online chart creation tools. Sure, every market has competition, but this one has exploded recently and is ripe for consolidation, which will make it even harder to release new products that can hold their own.

Given that my company is "Neato Software", the name obviously lives on. There just won't be a core data visualization product named "Neato". However, as development progresses on lowercase, perhaps it makes a comeback as a feature, a theme, a plug-in, or something.

Have thoughts on the BI and data visualization market? Let me hear them on Twitter @cschidle.

An honest look at my life as a wantrepreneur. I quit my job because I wanted to see what…

A postmortem of Turnout, a mobile-first event ticketing solution. Turnout was this brilliant idea I had (sense the sarcasm)…