An open letter to Allegiant Air about their annoying unsubscribe process and how they can suck less.

Allegiant's unsubscribe process is not the worst I've seen (looking at you, Sears), but it is the only one I've come across where you are forced to watch a video and enter a secret code in order to unsubscribe. The video is a few seconds long, featuring some text about why Allegiant is so great. At the end you're forced to type in "travel is our deal" to complete the unsubscribe (see below). 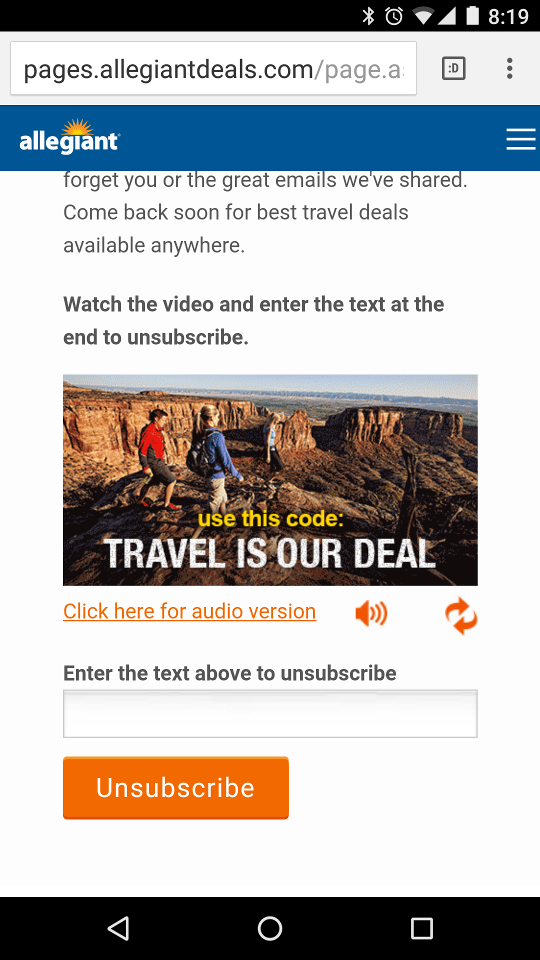 I'm sure Allegiant probably thinks this is reasonable. They want the customer to reconsider unsubscribing, so they think something like "Hey, let's remind them that we're a great option for budget travel. We can do it with a video. It's really short so they won't mind."

What really happens is this:

I won't even get into why this is poorly thought out from an accessibility or technological prospective, the point is that making your customers jump through stupid, time-wasting hoops that are far from the procedural standard is a mistake.

(Continue reading if you like, but just FYI the following devolves into a different rant about why I just don't like Allegiant.)

For the record, I won't fly Allegiant again, but it's not because of their unsubscribe tactics. It's because Allegiant has one the most poorly conceived business models I've ever seen.

They think they are offering a budget-friendly, no frills, à la carte air travel service where you only pay for what you want.

But instead, what they're really doing is taking air travel, something that is already an incredibly stressful and anxiety-inducing activity (thanks a lot, TSA), and making it much worse. Take the booking process for example:

Allegiant is consistently ranked the worst or next-to-worst domestic airline for customer satisfaction. Smart companies know that when your customers tell you that you suck, you change your business model to not suck so hard.

Allegiant, here's an idea for you. Become the opposite of what you are now. Become the easiest airline to fly in the U.S. Keep it simple, stupid; flat fares inclusive of everything related travel. That means seats, bags, boarding passes. You can still be "no frills" when it comes to the non-travel related things, like food and drink and digital entertainment. In fact, why not come up with the simplest food and drink menu in the business. Offer, let's say, 4 items to choose from. Done. Maybe even pioneer a "rent an iPad" service on flights. The point is that everything related to the trip before you get on and after you get off the plane is taken care of with the all-inclusive fare, and everything that takes place on the plane is paid on demand. Make your customers feel like you are actually taking care of them.

I know that you want to point out that you currently have some of the best profit margins in the business. Well, I don't give a shit about your margins. Focusing on maximizing profit margins instead of actual profit is what foolish businesses do, and I guarantee that an overhaul of your business model and improving customer satisfaction would yield higher profits. Currently you're driving customers away.

It also doesn't help that you are late all of the time (seriously, fix that).

Oh yeah, and how the hell do you not have a loyalty program? This is absurd. In the airline industry loyalty programs are huge. They give customers an incentive to pick you even when your prices are higher than the competition. Let's say I'm flying to Cincinnati and Delta is $70 more expensive than you. I earn miles (or points or whatever) with them so I'm immediately incentivized to choose them despite the higher price because I might get something for it later. Did you know that at least 25% of airline miles go unredeemed? (I actually believe it's much higher than that but I can't find the data to prove it.) The extra revenue generated by your loyalty program should more than cover eliminating the super annoying up-sells in your current business model.

So you've got some work to do. But first, get rid of that stupid unsubscribe video.

Hey Allegiant, I live in town. If you want some help implementing a new loyalty program you can hit me up on Twitter @cschidle.

The Definitive Guide to Resume Length

For resumes, less is more. Here's my handy guide for writing a concise resume. I just updated my resume.…

Why I Wear the Same Thing Every Day